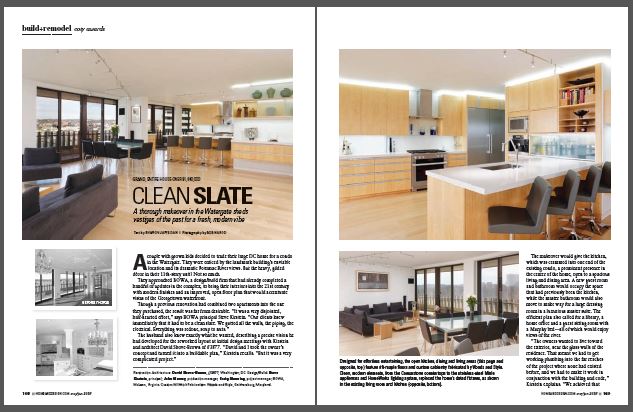 Excerpt:  “A couple with grown kids decided to trade their large DC home for a condo in the Watergate. They were enticed by the landmark building’s enviable location and its dramatic Potomac River views. But the heavy, gilded décor in their 11th-story unit? Not so much.
They approached BOWA, a design/build firm that had already completed a handful of updates in the complex, to bring their interiors into the 21st century with modern finishes and an improved, open floor plan that would accentuate vistas of the Georgetown waterfront.
Though a previous renovation had combined two apartments into the one they purchased, the result was far from desirable. “It was a very disjointed, half-hearted effort,” says BOWA principal Steve Kirstein. “Our clients knew immediately that it had to be a clean slate. We gutted all the walls, the piping, the electrical. Everything was redone, soup to nuts.”
The husband also knew exactly what he wanted, describing a precise vision he had developed for the reworked layout at initial design meetings with Kirstein and architect David Shove-Brown of //3877. “David and I took the owner’s concept and turned it into a buildable plan,” Kirstein recalls. “But it was a very complicated project.”…”