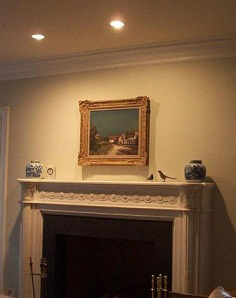 Home / Blog Posts / Lumens per Watt: the “MPG” for lighting in your new renovation

What kind of lighting should you use in your home renovation? There are a number of factors: the looks of the light fixtures, the ideal amount of light for a given task, even the color and direction of the light itself.

One factor to consider is how much light you get for the electricity you buy. There’s a big difference between the worst and the best performers.

means you’re getting a better deal.

Traditional incandescent light bulbs create between 12 and 18 lumens for every watt. Halogens are just a little better, ranging up to 22 lm/W.

That’s an abysmal ~10% of the electricity converted into light! All the rest of the energy is converted into heat. During the summer, that waste heat has to be removed from your house by your air conditioner, at considerable expense! In winter at least you want the heat, but it’s three times the price as heat from your furnace.

Fluorescent  lighting is generally much better. Compact fluorescent bulbs (CFLs), the curlicue style that fit in most ordinary fixtures, feature lm/W  ratings in the 40-60 range. That’s around four times as much light for the same electricity. So, a thrifty 13 watt compact-fluorescent bulb puts out about the same lumens as a 60 watt old-fashioned bulb.

There are downsides to fluorescents, of course:

LEDs: the future of lighting?

LED lighting has the potential to overcome all these downsides of compact fluorescents, with the same high “mileage” ratings. In fact, there are already LED lights on the market right now that deliver more lumens where you want them, have great color, and price out competitively, at least in the long run.

The best LEDs are really great. They are as efficient as compact fluorescents, with better color. They come on immediately with no warm-up period and are dimmable. While the price up front is more, they last longer and use less electricity, and in the end are much cheaper than incandescents.

Careful shopping is in order, as the LED market is definitely a mixed bag right now. Some LEDs on the market are dim, have terrible color, are inefficient—or all three! Using what we know about lm/W, CRI, and verifying manufacturer information through Department of Energy testing, we have been able to find the winners on the market.

We have installed LED recessed downlights from North Carolina-based CREE on several projects. Besides a very high 60 lm/W rating, they provide an even, warm, diffuse light that one client says is especially nice in the morning, as they prepare breakfast in their kitchen.

The best part for one of our clients came when they called our Customer Service team to ask how to replace the LED light bulb, should one go out. Imagine the pleasant surprise when we calculated the replacement timeframe: at 6 hours use every day, it will be about 13 years before they need a replacement; at 3 hours a day, 26 years! And, they’re saving money on electricity every day.

A client who is a fine-art photographer didn’t like the LED lights because they change color a bit when they are dimmed. That was before special adjustable dimmers were available for LED lighting, so it may be a solved problem at this point, but it’s something to be aware of.

CREE lights are a bit expensive up front. Compared to traditional recessed lights they add maybe $20-50 per light. But, they last as long as 15 or more $3 floodlight bulbs, so the bulb cost is about even. Each one saves about $15 in electricity per year, so a kitchen with ten can save you $150 a year, nothing to sneeze at; plus no bulb changes for over a decade, and you’re saving the pollution from the electricity you didn’t need.